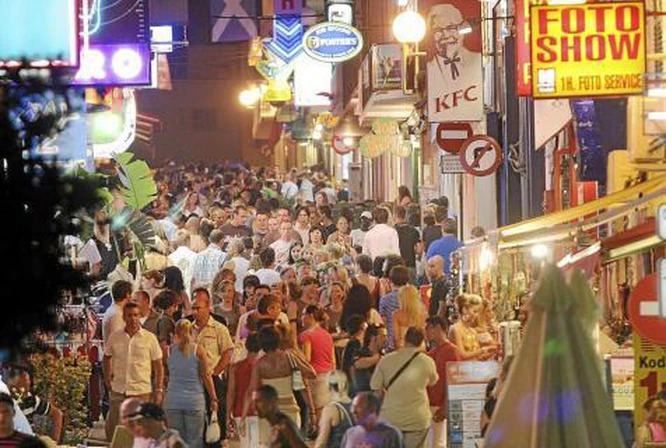 San Antonio was once known for its fun-loving, young tourist crowd and 24 hour excitement. With a buzzing atmosphere cheap drinks, it was the place for youngsters to get away from the norm and enjoy a cheap break in the sun.

This year has seen some of the biggest changes to the Island from ascendant authority figures which have caused a sharp decline in tourism and a colossal debate between business owners, workers and residents on social media.

Last year bars were ordered to remove chairs and tables from terraces in The West End to ‘cut down’ on the noise which affects residents, and often attracts crime to the area. During this winter, Sant Josep’s council decided to ‘clean up the strip’ even further this summer by placing regulators (limiters) on bars to monitor the level of sound being distributed from each establishment which they decided to ‘target’. This means that businesses can be fined thousands of Euros for going over the miniscule 65db on outside spaces. All bar doors need to be closed by midnight to avoid noise transferring outside. Customers are then herded inside to enjoy the rest of their night, that is until 3am when they’re all then asked to leave.

These new rules have come as a shock to some tourists who aren’t up to date with the goings on in San An, they’ve been baffled as to why ‘The Party Capital of the World’ is making them go to sleep early.

Many tourists don’t come here for the overpriced clubs, and for those who want a ‘cheap’ break with their friends are now finding themselves with very little entertainment past the witching hour.

Hotel parties have now become an issue, as well as beaches being trashed by revellers leaving their rubbish behind when they’re finished. This is causing severe damage to marine life and the environment.

Business owners are furious and have attended many meetings at the council to voice their concerns for their futures on the island, sadly to no avail.

Organised crime within the West End part of San Antonio is rife, with ‘resident’ drug dealers and violent prostitution gangs in the summer months, bar owners do not understand why these particular groups of people aren’t being fined and removed. The councils aim is to ‘clean up’ San Antonio hence the new laws but they are failing to implement any laws regarding the ongoing crime in the area, whilst specifically singling out bar owners.

The problem has also spread further afield to The Bay of San Antonio.

Whilst the Bay doesn’t have to abide by the 3am closures, or the ‘no tables/chairs on terraces’ laws , there are still noise limiters imposed in the bars and hotels. Live music artists and some late night bars are now struggling to make ends meet and many venues have been ‘raided’ by the police for ‘excessive noise’, having their equipment confiscated and extortionate fines slapped on them.

Some local and more ‘upmarket’ venues, clubs and various bars within, and outside of the Sant Josep municipality haven’t been affected.

Sadly this season, San Antonio is starting to resemble a ghost town. Party goers are favouring other destinations such as Bulgaria and Croatia where they have a lot more leniency and get more bang for their buck.

It seems that the current government wants to rid the Island of its ‘youth party culture’ and ‘bargain holiday destination’ label and replace it with a ‘smarter’ more upmarket crowd which includes privatised beaches and adult only luxury hotels.

Some people think it’s a travesty and ‘the end of Ibiza’ while others think it’s a welcome change. The countless discussions over what The West End could be changed into has mutually and hypothetically been agreed on as ‘restaurants and cocktail bars’.

Many believe that having these types of businesses around The West End will lose the negative vibe of that part of San Antonio, and become more family friendly.

However the music laws are a serious issue, and aren’t just affecting The West End or teenagers who want to listen to banging house music all night. There has to be some sort of happy medium somewhere.

Who knows? Everything takes time and we will just have to ride this one out and see!

This website uses cookies to improve your experience while you navigate through the website. Out of these, the cookies that are categorized as necessary are stored on your browser as they are essential for the working of basic functionalities of the website. We also use third-party cookies that help us analyze and understand how you use this website. These cookies will be stored in your browser only with your consent. You also have the option to opt-out of these cookies. But opting out of some of these cookies may affect your browsing experience.
Necessary Always Enabled

Any cookies that may not be particularly necessary for the website to function and is used specifically to collect user personal data via analytics, ads, other embedded contents are termed as non-necessary cookies. It is mandatory to procure user consent prior to running these cookies on your website.