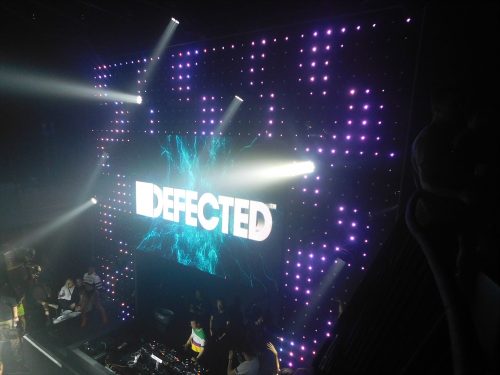 Defected returned with an almighty bang last night to Eden, and it was an electronic whirlwind from start to finish.

Legendary founder Simon Dunmore played an eargasmic set at the sold out event alongside his protégé and talented artist in her own right, DJ Sam Divine which marks the start of their 21 week residency that graces Eden’s dancefloors every Sunday until the first week of October.

Their resonant VAULT ‘Gold Incubus’ soundsystem has once again brought the party back to San Antonio for summer 2018 where thousands of locals, tourists and workers all enjoyed an experience to remember under the same roof. Or as Defected’s iconic slogan states, ‘In Our House We Are All Equal’.

Dunmore and Divine blasted out an array of the summers favourites from Ferreck Dawn’s ‘In Arms’ to Krystal Klear’s ‘Neutron Dance’ and last years banger, ‘Cola’ by CamelPhat. There was an eclectic collection of deep, tempo infused tunes that kept everyone’s feet moving during their whole set. It really was an experience and a half!

French duo Amine Edge and Dance delivered an impressive mix including their previous hit ‘Lost’, which made it to number 1 in the Beatport charts in 2014.

Dj Haus had the crowds stomping as always and the infamous Mambo Brothers carried on the ‘after party’ at Eden (pre-party was at Café Mambo) with the Defected family until morning.

Sore heads (and feet) all round today! Would we do it all over again? You’re damn right we would!

See you next Sunday!

This website uses cookies to improve your experience while you navigate through the website. Out of these, the cookies that are categorized as necessary are stored on your browser as they are essential for the working of basic functionalities of the website. We also use third-party cookies that help us analyze and understand how you use this website. These cookies will be stored in your browser only with your consent. You also have the option to opt-out of these cookies. But opting out of some of these cookies may affect your browsing experience.
Necessary Always Enabled
Necessary cookies are absolutely essential for the website to function properly. This category only includes cookies that ensures basic functionalities and security features of the website. These cookies do not store any personal information.
Non-necessary
Any cookies that may not be particularly necessary for the website to function and is used specifically to collect user personal data via analytics, ads, other embedded contents are termed as non-necessary cookies. It is mandatory to procure user consent prior to running these cookies on your website.
SAVE & ACCEPT