So on Friday I visited a brand new coffee & dessert restaurant in Walthamstow, East London called Brü.
Don’t be fooled by the name though. According to the manager and business partner Imran, the majority of his customers assume it’s a Scandinavian owned company simply because of the ‘ü’ in the Brü. It is in fact as simple as I thought, it means brew. Being a northern born company (Leicester), the word brew is widely used when referring to tea or coffee, and the two dots above the ‘u’? It’s simply a smiley face!
Imran has a lot of knowledge of the Brü brand, and rightly so. He has worked closely with the owner (his cousin) Hamza to build the company into not one, not two but three venues with it’s third being right here in my home town of Walthamstow.

Their first Brü opened in Leicester three years ago. Specialising in cakes, desserts, ice creams, coffee, tea, sorbets and treats that would even make Willy Wonka himself jealous. Their popularity grew which enabled them to open their second venue in Harrow, North West London a year ago.
Two months ago Brü descended upon Walthamstow in all it’s flavoursome glory and has been a popular favourite with newcomers and locals ever since. Many of whom return on a weekly, and sometimes daily basis which shows that the business is very focused on community relations. They have even been featured in some local publications including The Village E17 listing of the best places to visit in Walthamstow!

From the second I entered I felt a very warm atmosphere. Happy staff, and even happier customers. I took a seat with my friend and after a short wait, Imran came along with a tray for us. On this tray were hot chocolate drinks, one white and one classic. I should have tried this straight away, but as usual I was too busy nattering so I only got to taste it once it had cooled down. It was still good! I love a hot chocolate.

Next up came the best bit, desserts!
As soon as I looked at the menu I knew I wanted to try the Strawbella Waffle. This mouthwatering dish was filled with Nutella chocolate, topped with Belgian Chocolate, fresh Strawberries and whipped cream. It was beyond amazing. Crispy waffles mixed with melting chocolate, and the cream? A perfect combination! Ideally it was meant to be shared between myself and my friend, but I think I had the majority of it. I’m sorry (I’m not really) but it was just too good in my opinion! 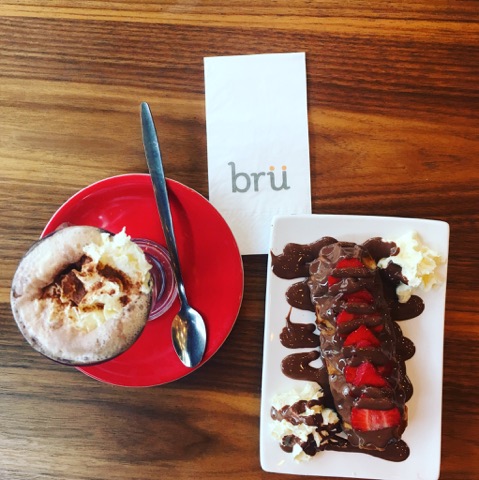 Onto the Cookie Butter Waffle dish. With a filling of Biscoff caramelised cookie spread, drizzled with sauce and topped with a Belgian Speculoos Biscuit, this dish along with the Strawbella are their two most popular options at Brü, and I can see why! Apart from it sticking to the inside of my mouth which was obviously to do with the fact that I shouldn’t have put that much into my mouth in the first place, it was faultless. A thick texture, which is soothed by the cream on the side! Simply scrumptious!

You have to have a serious sweet tooth, or be in need of a major sugar rush to fully appreciate what I had, as the dishes are extremely rich but simply fantastic none the less.

Unlike a lot of dessert venues, Brü caters for those who suffer from allergies. With a range of tasty options available, suitable for everyone, including gluten free varieties, Oatmeal Milk, and eggless cakes. They’re also a Halal eatery. Even their Marshmallows are Halal, perfect for hot Chocolate drinkers this coming winter!

You’d be mistaken for thinking that Brü offers a basic Tea and Coffee selection. That in fact couldn’t be further from the truth. Imran explained to us that they keep all their loose leaf teas in jars on the main counter. The staff are always on hand to explain these wonderful ingredients to you, ensuring you get one that’s perfect for you. A varied option for every palate.

Now I’m not a big tea drinker. I’ve never actually had a cup of typical English tea in my life. The look and smell has always been enough to make me cringe. Brü however doesn’t offer a generic assortment. And this, is a great thing!
I was introduced to a number of choices including Cinnamon Spice, and Fresh Lemon & Ginger before settling on their home made ‘Vanilla Chai’ (decaf) tea.
Strong scents of Cinnamon, Ginger and of course Vanilla came through as soon as I poured it into the cup. I actually ended up having three cups as it was that good! I got a big, gorgeous waft of ‘Christmas’ and ‘winter’ and ‘cosy nights in’ from this drink. It really tasted beautiful!

The decor is what I would class as Retro. An uncluttered, natural design with lots of creative lighting ideas, bookcases and relaxed seating. 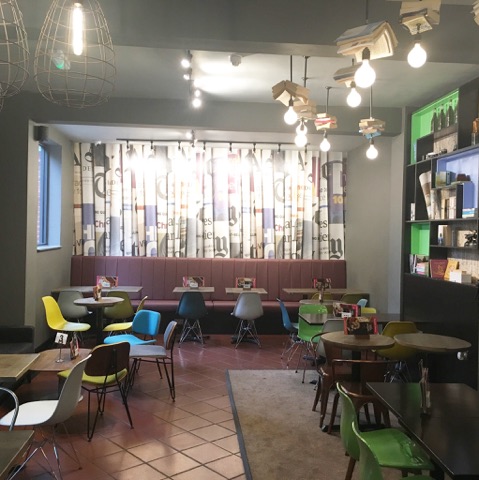 The main visible focus of the venue is of course their Ice Cream and Sorbet selection counter. Situated on the right as soon as you walk in, it’s filled with a range of bright colours, flavours and styles….a haven for Ice Cream lovers. I was offered to try some but I literally couldn’t eat any more which was a disappointment because I was eyeing up their Pistachio option as soon as I walked through the door. But I will be back!

Brü is a great place, I see it being very popular with families and kids due to their excellent choice of afters (or before’s if you can’t wait). Whats even better is that their prices are so affordable it’s actually tempting to buy extra just for the sake of it. I however cannot afford another inch on the hips so I won’t do that, but you catch my drift!

Their Tea’s range from £2-£3 and their Waffle dishes are only £3.95! You cannot get better than that on price, and the quality of ingredients can be tasted in every mouthful.
Whats even better is that all their Waffles, Sorbets, Ice Creams etc are made at their production centre in Leicester and delivered to Walthamstow every week!
Brü also sells Sandwiches, Panini’s, Cookies, Sundae’s, non- alcoholic Mojito’s and so much more! 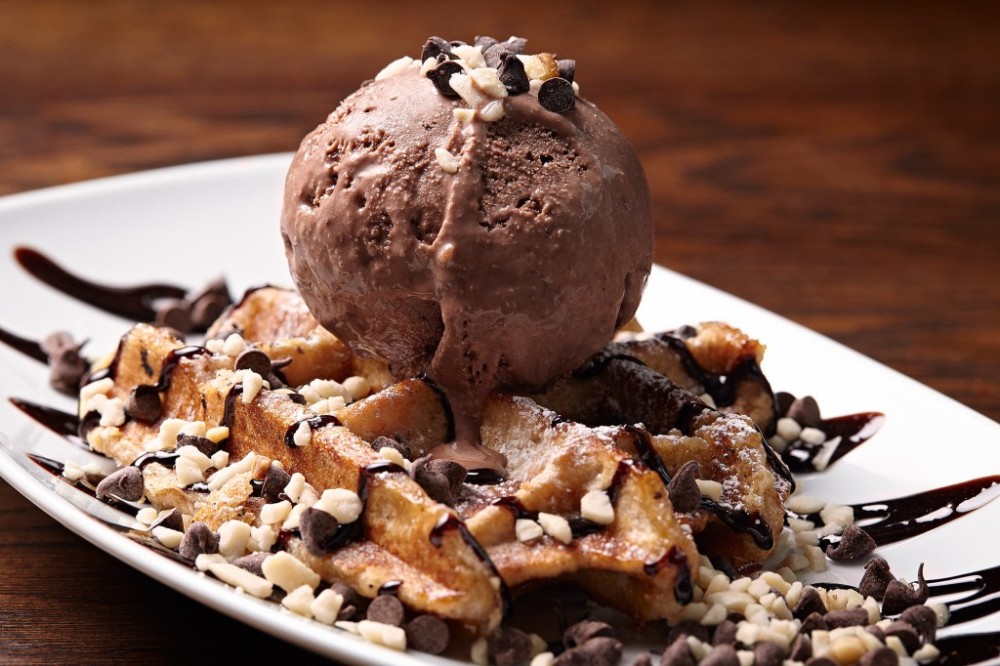 I would thoroughly recommend Brü if you’re in the area. They open at 7am every day and close at 11pm so you really have no excuse not to pop in and try something delicious out!